Today’s #blogtober subject is to share your earliest horsey memory, to be honest, I don’t think I can remember my first horse encounter, or even tell you how I become so interested in horses, but I can share with you a few of the memories I have from growing up as a child, and how horses became part of my life in such a big way.

My Mum and Dad are not horsey, in fact in my family, I was the only horsey person, I taught my sister to ride as she was growing up for a year or so when she became interested, and my niece is interested in horses after spending time with Mikey after I brought him and she is currently riding is super cute pony at my yard Jake, but there was no-one older than me to ‘get me in to is it’ as such – it just seemed to happen!

I started with lessons once a week, I would of been about 6 or 7 years old I guess, as I grew older I became more interested, I would do pony mornings, where you learn how to look after and care for a horse and then as soon as I was old enough to stay at the yard after my lessons I did, it started off just being an odd morning here and there, and then soon progressed to every Saturday, and as many days in the school holidays as I could persuade my parents to take me!  I was hooked!

The pony in the picture below is Skippy. 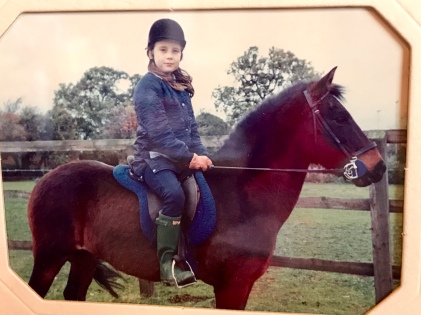 Whilst there are lots of other ponies from my childhood, Skippy remains in my memory, very clearly, I even have one of his shoes still hanging up in the conservatory – almost 30 years on!  Skippy lived in a stable with a goat, called Rosie and in a word, she was mean! It used to be a terrifying experience if Rosie was in the stable and not in a good mood as she would corner you in the stable and head butt you with her horns – needless to say as much as I enjoyed riding Skippy I was never quick to volunteer to tack him up!

As a kid I used to love seeing horses and ponies whenever I could and every other Sunday when my brother and I would see our Dad I would persuade them that we should go for a walk, we had found a route that had lots of horses and ponies as part of the route, (a few of which a pictured below) – we would take them apples and fuss them! They always seemed pleased to see us – looking back now its a wonder the owner didn’t come along and tell us off! 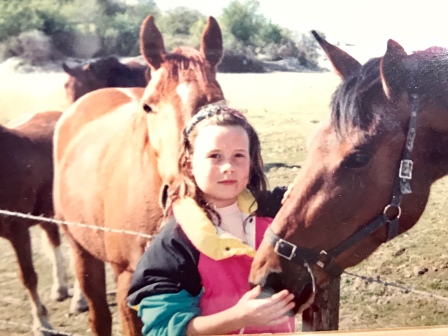 Over the years I had a couple of breaks from riding, mainly down to my career taking off and me not having the time to give to the hobby, but around 10 years ago I started riding a horse that I had found advertised on Pre Loved. Renny was his name, and he was a big gentle giant, an ex advance eventer, he really got me back in to the sport, and after 5 years with him, I finally decided it was time to buy my own horse, and that’s when Mikey came along, I have owned him nearly 4 years now, and the rest as they say is history!

What horse or ponies stories do you have from growing up?  Do you have a funny story about a particularly naughty pony from your child hood?  Comment and let me know!

I would love to hear from you, and as always, the other bloggers taking part in #blogtober have been sharing their stories so if you want to read some more first memories, have a look at the link below: